This is an essay about different types of starch – some new world and the rest old. The goal was to recreate a plausible mid to late 14th century starch that could have been used on veils, specifically the kruseler or fretwork style ones. These veils are common on effigies and in illustrations from the period, and thus likely a common fashion accessory for the wealthy. Because I am making a replica of one such veil I needed a starch that could be documented as well as the veil is.

Starch dates back to ancient times. Cato references the use of starch to stiffen linen in De Re Rustica, written by 149 B.C (Auden, 1922). The use of it becomes quite popular during the reign of Queen Elizabeth, and it remained heavily in favor for most of the western world until World Wars. Now it is infrequently used among the population of the United States – most often with members of the military, those who are wealthy, or those who are employd of large businesses. Recently much work has been done on recreating starches from the medieval period.
Auden (1922) created a list in order of starch percentages. Potatoes have the least starch, at about 15%. Wheat contains between 53 and 60% starch. Of the materials I test in this article, corn is third at between 55-65%. Rice varies more, but is by far the best at between 50-75%.

This recipe has been translated below and is used as the basis for three of the experiments into starching.

Take a quantity of bran and boil it in clean water, and let it stand 3 days or more until the water is bitter or sour; then squeeze the water out of the bran and immerse your clean cloth, linen, ‘bokeram’, or ‘carde’, or anything that you want, and afterwards dry it, and smooth with a stone.

According to Auden (1922), bokeram means buckram, carde means thread, and the last section of the drying means that one should “polish the surface with a slekystone.” Auden also translated sindonem as “muslin” however my experiences with Latin have translated it as “linen” and that was what I chose to use in my translation. I also wonder if the note “R.” is a reference to an amount of bran as in some medieval documents “R.” is shorthand for 80.

In the Middelaldercentret issue from winter 2006/07 is an article entitled Forsøg med stivelse og stivelsesudvinding. This article discusses a series of experiments conducted on making starch and how well it held up under use. One of my experiments into making wheat starch is based on this article. I have included this article as Appendix A. This kneading-style recipe is actually very similar to that of Cato’s in De Agricultura (see Appendix B) which is for making an eating starch.

To make my potato starch, I used the following recipe by Liba.

I didn’t use a recipe for my corn starch. I just took water and put it on to boil. When it was boiling I turned it down to a simmer and added small amounts of corn starch until I reached a semi-clear consistency that I desired. It is a very small amount of starch needed.

I didn’t use a recipe for rice starch either. Making rice starch is very much like making rice glue – the process is the same. You boil rice with an extra amount of water in it. Once the rice is done, remove from the heat and let it sit until the water becomes cloudy and gooey. Strain off this water – that is your starch.

I will show photos of all of the starches, and photos of what a piece of linen dried in the starch looks like. Then I will discuss the pros and cons of making each type of starch. I will also provide detailed explanations for the last three starches – which are all 14th century plausible.

Some people love corn starch. I struggle with it. I either put in too little or too much. I starched my first fretwork veil with it, and there was too much starch. I had to launder my starched veil and hang it to dry (and it was still starched from the initial starching job). I would use this before using potatoes, but it is not one of my favorites. 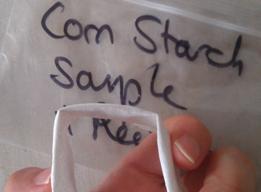 The problem with the potato starch, I learned, is that the potatoes need to be extremely clean. You must scrub them, not just wash them, and perhaps even remove the skin – otherwise the resultant water is dirty, and it is difficult to remove the dirty water from the starch. I disliked making this starch very much. I only used one potato, but it does not result in a very high-quality starch when compared to the other options. 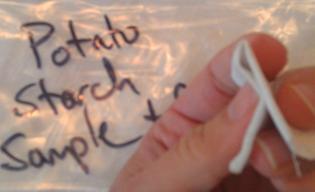 For this starch, I took enough whole wheat and water to make dough. I then placed this dough in a bowl and covered it in water. I kneaded it into the water until it fell apart. I strained this water out using a cheese-cloth. I then repeated the kneading with the remaining dough a second time. After this straining, the dough felt something like over-chewed bubble gum. I threw out the remaining dough. I let the strained fluid sit for a day, until there was a white material accumulated at the bottom of the jar.
Next I strained out as much of the non-white water as I could. This white material, (Boutrip, et al., 2006) article – is the starch, so I wanted to retain this. The article suggests a 2-1 water-starch ratio when preparing the starch for use. I ended up struggling to get the last bit of water out of the starch, so instead I opted to use that as my water portion of the ratio. As you can see in the photo, (img 1.) it is not quite a 2:1 ratio, but it worked quite well.

So I tried to duplicate the Sloane recipe in several ways. First, I took luke-warm water and whole wheat flour, mixing them into a fairly thin soup. I caped it loosely, and let it sit for 3 days. The result was fairly nasty. It had begun to ferment on its own, the wheat flour separated from the water. It smelt sour, I was not about to taste it.
I then strained the mixture and poured it into a cleaned jar. I dunked a piece of linen in it right away, to test the recipe out. The resultant mixture has since separated – as you can see in the photo. This gives you an idea of how much starch was in the water, and likely explains why the starch mixture was about as stiff as the potato starch mixture.
I would suggest if you choose to use this method, let the mixture separate, scoop out 1/4 to 1/2 of the water from the top, and re-mix the mixture. This would create a much stiffer linen I think. 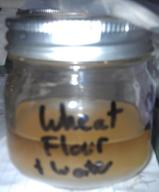 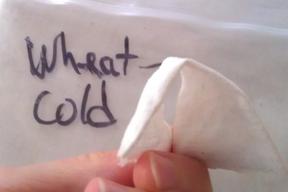 For this experiment I took 1.5 cups of whole wheat flour and 3 cups of water and boiled them together, mixing as I went. The resultant mixture was very thick – like a pate. I added another 3 cups of water and mixed it again, with a mixture that is not so thick, but much more soupy. I put a cover on this bowl and let it set for three days.

The mixture did not change much over the three days, but it did start to smell as awful as the cold-set mixture (img. 1). I strained it on the third day through a fine cloth and collected the fluid (img. 2). This should be the starch water mixture, and it is appears to be an off-white. I then dunked a piece of linen in it to test how the starch worked.

After finishing these experiments I discovered a recipe from Cato’s De Agricultura on how to make a type of starch. His recipe involves using clean hard wheat that is not ground and takes 10 days. However, it ends with the double-kneading style of making starch used by Boutrup, et al. I am curious to try this type of starch, and may experiment making it to see how it does later and add it to this document as an appendix.

I also would like to try to wear each type of starched item to see how many days the starch would last under constant use. Perhaps I can do this in time, and get a sense of if any of these methods last better than others. I think I would also need to compare the starch to water ratio to test this method more fully.

Of the different types of starch I used, my favorite and least challenging to make cold-water set. Despite this, I ended up making quite a lot of the kneaded wheat version for the veil I was working on. This was because the 3-day wait time starch smelled bad, I didn’t really want to put it on my head for any length of time.

The excess starch I placed in a pan to dry off in the oven. This was a mistake as it turned into a clear hard jello-like substance. I think perhaps I didn’t let the water dry off slow enough. I would have put it outside in the sun, but it is February and I don’t remember the last time there was sun. This would have to be another experiment.

I also stored all of the starches for two weeks in my fridge. I discovered it does not keep well – especially the three-day soaked version. All of the starches except for the corn starch started to grow some type of mold on top of the fluid. The starch at the bottom was probably fine but the water smelled sour, so I opted to take this as a lesson that starch should either be powdered or used within 2 weeks from making it.

This site uses Akismet to reduce spam. Learn how your comment data is processed.